He arrived in the United States with $70 to his name, not knowing a word of English. Under the stigma of having fought on the German side in World War II, my father set out to build a new life for his family. 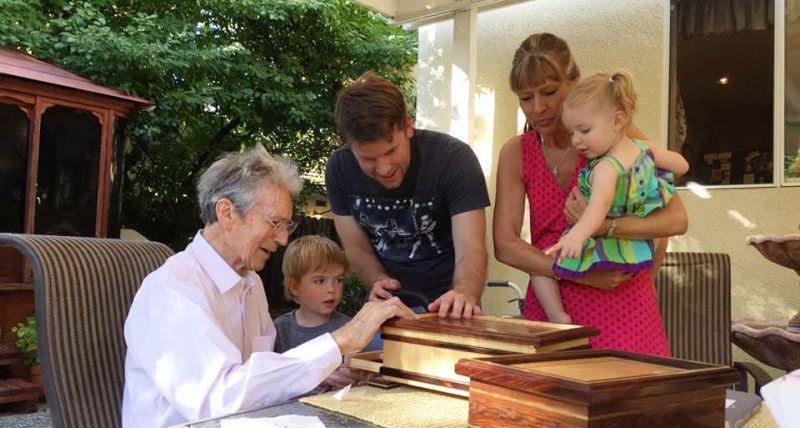 We held a memorial in Papa’s honor this last Saturday, and I’ve been reflecting on lots of childhood memories…

…how Papa would take me out for real coffee and cheesecake when I got a good report card (which is pretty great when you’re, like, nine)… how he would laugh at the antics of Jerry Lewis or Don Knotts until he couldn’t breathe…

He’d protect his full head of hair with a bathing cap in the family pool, and then just revel in how silly he looked … and oh, how mercilessly we teased him about his German accent.

So many fun memories. Along with these, I’m reflecting on the important lessons my Papa taught me.

Papa’s parents were Bible-believing, follow-the-real-Jesus kind of Christians. My grandfather Wilhelm was poisoned to death by the Nazis because he led Bible studies in his home.

Papa understood from early on that taking a stand for Jesus can be very costly – but he also knew that paying any price to serve Jesus is well worth it in light of eternity.

Read more of his story here: A Testimony of God’s Mercy.

2. Let your values be shaped by the Kingdom of God, not by culture.

Papa refused to be conformed to the patterns of this world. Having endured the nightmare of life and war under Hitler, he understood that no human leader or system of government can ultimately be trusted.

Papa’s allegiance to the King of Kings manifested in practical things like his refusal to read the Sunday newspaper. He felt that devoting six days a week to current events was plenty, and the Sabbath was for God.

He also limited our TV watching, relegating it to special family evenings as a way to shield us from being overly influenced by culture.

3. Serve Jesus by serving His Church.

Over the years, Papa helped found churches and served as deacon, elder, choir director, youth leader, Sunday school teacher, and mentor in the Body of Christ.

He spent many of his non-working hours helping at church in various capacities because he believed that the Kingdom of God on earth looks a lot like the local church.

4. Look for opportunities to do good (but don’t look for recognition).

Papa often sacrificed time, effort and money to help others. We’re beginning to find out now how many times he quietly helped people without letting anyone know.

Whether it was a single mom who needed home repairs, or a college kid who needed money for a car, or a recovering alcoholic who needed a job…Papa understood that we are God’s workmanship, created for good works in Christ Jesus.

We are God’s workmanship, created for #goodworks in Christ Jesus. No #goalpostdances here. #Christianliving

5. Use your talents to glorify God.

Papa believed music was a gift from God and a gift to give back to God. He sang beautiful tenor solos at church, put us in the choir he directed, and provided us with music lessons so that we could glorify God with our talents.

Papa’s favorites were classical music and the great hymns of the faith, but any music which glorified God was fine with him.

Until his final days, he would stand up front at The Father’s House and stretch his frail arms upward to worship God.

6. Give gifts that require time, effort and creativity (not just money).

Some of my most treasured possessions are those made by my father’s hands, the most stunning of which is a handcrafted jewelry box made with exotic inlaid woods.

Such gifts are priceless. They will be handed down to my children and my children’s children.

Anything you can buy on Amazon pales in comparison – just saying.

7. Pray continually, and speak blessing over others.

Despite his knees being painfully inflamed by rheumatoid arthritis, I remember seeing Papa kneeling in the corner of the living room to start his day in prayer.

In later years, he would often tell me, “Every time I sit down to eat, before I lift a fork to my mouth, first I pray for all my households.”

Papa also intentionally blessed us (and others) often.  Perhaps even more than the gifts he created with his hands, I treasure the gift of his spoken blessing.

Thank you, Papa, for your gifts, your blessing, and your example.

And thank you, Father, for giving me Papa as a father.